A usage quota is simply a limit on the amount of traffic that a user is allowed to generate in a given amount of time. Usage quotas have a number of attributed that make them an effective means of managing P2P activity:

The following form shows how a quota is defined on Traffic Sentinel: 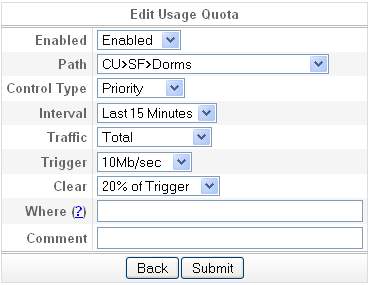 In this example, a Priority control is applied if any host in the Dorms averages more than 10Mb/s during the Last 15 Minutes. The control will be automatically removed once the host's traffic drops to less than 20% of Trigger (i.e. averages less than 2Mb/s for 15 minutes).